Interview with Joey Tempest and Mic Michaeli by Mónica Castedo-López

HI Guys welcome to this blog dedicated to EUROPE ,I have news this is a new interview with Joey and Mic enjoy it:.

The biggest Swedish rock export was scheduled to have their Download baptism on the Friday, but events in the shape of adverse weather conditions and traffic jams made it impossible for Europe to perform their set. Shortly after the announcement of the cancellation to a very disappointed crowd, I met up with singer Joey Tempest and keyboardist Mic Michaeli in their dressing cabin to find out more. Having crossed the muddy fields myself to be a witness of their highly anticipated Download debut and making the same unpleasant journey back, it felt comforting to be indoors and share their feelings.

JT: We had a terrible day. It started this morning. I live in England but I went to Heathrow and, as everyone was coming from different places, one of the flights was two hours late, so we left Heathrow very late. We thought we could make it and we were driving and then we hit the bad weather and traffic again. We were sitting in traffic for another two hours and we almost made it. But at the end of the day we had to call it off because we wanted to do a great show rather than a very short and strange one without line checking. We feel terrible about it. Some fans made it here just for us and we wanted to play. We grew up hearing about Castle Donington, Download Festival, and this would be our first Download experience. We had a terrible day and it’s strange emotions because we never had this! Happened to us at the last minute, really. So it’s very strange indeed.

Have you been invited to play next year?

JT: We have a good relation with Download and nobody is angry with anybody. It’s just unfortunate weather conditions, so we are very much looking forward to coming back next year and playing Download.

Before that, you’ll be back in the UK on a tour in November/December. What can you tell us about the setlist for those shows?

What was the planned setlist for Download? Would it have included ‘Bag Of Bones’, which is my favourite new track?

JT: It was only eight or nine songs. We decide everything on the last minute, but we had three new songs: ‘Riches To Rags’, ‘Not Supposed To Sing The Blues’ and ’Firebox’, and maybe ’Demon Head’. We haven’t introduced ‘Bag Of Bones’ to the set yet. I think it will be more for our big Bag Of Bones Tour. It’s only festivals this summer and it’s usually shorter sets, more explosive. The first songs we’ve introduced from ’Bag Of Bones’ are ’Riches…’, ’Firebox’ and ‘Not Supposed…’ . In the autumn we will probably add three or four more

What other songs were you planning to play here at Download?

JT: Other songs we talked about was ’Scream Of Anger’, ‘Rock The Night’, ‘Superstitious’ and ‘The Final Countdown’. Only eight or nine songs.

For the studio album, you have gone with Kevin Shirley and recorded it pretty much live. For your next album, would you go with him again as a producer?

MM: There are no plans yet. We are going to be touring this and next year and then at the beginning of 2014 we’re going to write some songs and go in the studio. We talked to Kevin and he really wants to make another album with us, so hopefully we can work our schedules and do it because we really enjoyed it and had a great time. He taught us a lot of things or at least he made us aware that you can actually leave some dirty corners. We have great respect for each other.

Before you decided to go with him, did you listen to other albums he’s produced, like Joe Bonamassa or Mr. Big, for instance?

JT: All of us knew about Kevin Sherley because he’s been around for a long time. He did The Black Crows, Aerosmith and Journey staff. What blew our minds was his production with Bonamassa, ‘The Ballad Of John Henry’. We were listening to it in the dressing room and talking that he must be on the same planet as we are because it sounded so good. So we called him up. He‘s done so many album, some albums we like better than others but I think he’s one of the best producers in the world.

Have you spoken to any of the bands before you worked with him?

MM: Not really. We spoke to Joe Bonamassa [who guests on the album] a little bit, but we wanted to make our own decision. We met him a couple of months before we decided to work with him and it seemed to work out really well, socially as well.
JT: Kevin has this streak with all his productions. They sound really honest and that is what we like. He’s a really good producer.
MM: Europe has never used the same producer on two albums in a row, so if we work with Kevin, it will be the first time ever.
JT: It’s a big moment as it will be our tenth album too.

Looking back, how has your journey been in your musical career?

JT: It’s just amazing that we came here today. Five of us, the same guys doing maybe our most successful album since the 80s with regards to reviews and chart positions. It’s been an amazing journey. We’re very lucky.

You deserve it, guys!

MM: I think we are a bit like explorers of our own musical universe and it’s fantastic to have those people who have joined us on the journey.
JT: And it’s more people coming along all the time. You start to see younger generations with ‘Bag Of Bones’.

Have you started writing new songs yet?

JT: No, not yet. All that comes from touring. We make all the decisions in the dressing room. We play music to each other and we talk about the soul of the band and where we are going. And it hasn‘t happened yet because ‘Bag Of Bones’ is so fresh and we love it so much.

JT: We just look forward to playing ‘Bag Of Bones’ and coming to all corners of the world.
MM: Amen! 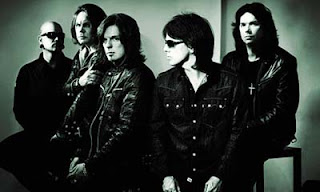 THIS INFORMATIONS WAS TAKEN BY :
http://www.rocktopia.co.uk/index.php?option=com_content&view=article&id=2425%3Ainterview-with-europe-download-festival&catid=924%3Ainterviews&Itemid=369